How we averted disaster! A true story!

How frequently do accidents happen? I don’t have the numbers right now, and if you have them, do send them to me. But I know accidents are happening all the time. Not everybody, however, experiences a serious accident that threatens their life or business.

But because it didn’t happen before doesn’t mean it won’t happen in the future. In some expected or unexpected way. And that is why most people who can afford it take an insurance policy, or even several insurance policies for different things. 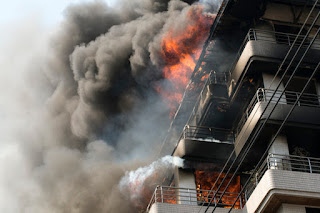 When it’s about our computers, or, more precisely, the data in them, we tend to be careless sometimes. It’s like – ‘What can happen to us? We haven’t done anything stupid!’

No you don’t need to do anything stupid to suffer an accident. Someone else may do something stupid, and you can suffer as a result.


And this is what happened to us. Our offices on the sixth floor of our 10-storey building were destroyed completely in a fire that ravaged six floors of the building on a Sunday night. The fire engines turned up late and their ladders couldn’t reach the sixth floor, until, hours later, they got a fire engine with a tall enough Snorkel ladder.

Everything was destroyed. Every single computer turned to molten plastic and metal, and the insurance company could only identify the number of machines (some 90 of them) from the half-molten remains of the printed circuit boards.

That saved our day. But only up to a point. It took ages for us to get the insurance money, and we got only a part of what we had lost.

But the bigger threat to our business was the complete loss of the data that resided in the destroyed machines! This included all kinds of materials, including thousands of photographs about our clients’ people and operations the clients did not have! It included thousands of artwork created, photographs and videos purchased online, business proposals written over one and a half decades, hundreds of painfully created presentations, research content downloaded from hundreds of sites, and more.

But we didn’t lose it!

All that information was saved, thanks to Organyze!

We had got Organyze Backup to automatically back up every single machine in our office at fixed times in the evening, and two sets of these backup drives were always taken and kept outside the office in a different location.

So, while we were watching the fire blazing from the ground outside the building, we placed orders for new machines (some arrived the same day, some over the next few days). We acquired temporary premises in another location, quickly purchased cables and knocked together some makeshift furniture with fabricated steel frames and plywood sheets, and chairs and other stuff, and by evening a temporary office was operational!
In the meanwhile, some of the staff, those who did the most urgent client work, had already begun work from their homes, using required backed-up data that was transferred to their home machines.

By evening the entire office was operational! Our clients, who included some of the biggest names in Indian business, said, Wow! How did you do this?

There was only word for how we did it. It was ‘Organyze’!

Organyze has received a patent from the US Patent & Trademark Office

Real footage caught on camera of the incident.